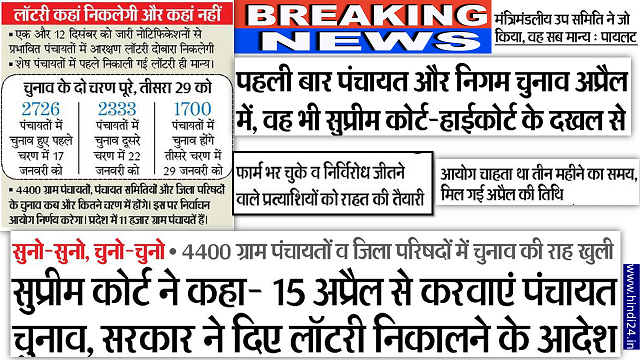 The Supreme Court has given relief to the Government of Rajasthan in the issue of restructuring of Gram Panchayat and Panchayat samitis and exempted elections from mid-April as per notifications in the remaining gram panchayats. The elections will be held on 15th November, 23rd November, 1st December and December 12 as per the four-reorganization certification issued last year. A bench comprising Chief Justice SA Boelder and Justice BR Gawain gave the interim direction on Friday on the SLP of the state Government and other parties.

Immediately after the Supreme Court judgement, the government issued an order regarding the lathe of Arakan in the panchayats. The high court had given an order to cancel all the notifications issued after 15th November on behalf of the State Government for restructuring of gram panchayats and Panchayat committees. The state Government had challenged it in the Supreme Court through the SLP. The Supreme Court on January 8 stayed the order of the Jodhpur chief bench of the High Court on December 13, 2019 and stayed the implementation. Balance

Where will the lottery go and where not
On December 12, the panchayats affected by the release of the Nantiification will take place in the Arakan Lattari Daibara.
In the remaining panchayats, the first latri extracted is valid. Two phases of election completed, third to 2726 Panchayats to be elected in first phase on 17th January When will the elections of 4400 gram panchayats, panchayat samitis and Zilla Parishads be held?

The election will be decided. There are eleven thousand gram panchayats in the state. 2333 Panchayats elections in 2nd phase of 22nd January 1700 panchayats to go to polls in third phase on 29th January Cabinet Sub-Committee says, all that valid : Pilot Deputy CM Sachin Pilot said that there were many such people who were sitting in the vicinity that panchayat elections would be postponed. The Supreme Court judgement has won democracy. The Cabinet Sub-Committee had also issued notifications, all of which have been validated by the Supreme Court. We also demand that the municipal corporation elections to Jaipur, Kaita, etc., are also in time.